To all who shall see these presents, greeting:
Know Ye, that reposing special trust and confidence in the fidelity and abilities of


in World of Tanks Division of Tactical Warfare,

to be Merged and Promoted to The Bandits (CP) squad.

The Fury Squad and the Hellcat Squad came together as a joint competition task force in order to have enough members to participate in competitive events. They have been participating in ladders/tournaments for more than 2 years and have been progressing forward with each event that they have participated in since they started competing.  The Task Force was been developed from a selection World of Tanks members that had extensive experience in the game, showed that they had the ability to understand the importance of tactics, exercise communication discipline, and most importantly showed a desire to compete.  Using the nickname "The Bandits," The task force has experienced many challenges while developing their competition team and bringing out the best of their members. Over the past two years the Bandits have competed against other clans who have bred their teams to be specifically for competitive tournament play only. Yet the Bandits have been successful when competing against these clans, regardless of being the under dogs of the events. The Bandits took first place in the very first tournament that they participated in, which is where they were introduced to some of these very competitive clans and proved that TG can be force to be reckoned with.

The Bandits started with the goal to reach the top 10 percent requirement, which was previously required to receive CP status, and work their way up through the 3 Tier [Intermediate, Professional, and Champions] league system. The Bandits recently finished a tournament and finally achieved the coveted top 10% status of their tournament and they have been invited into the Professional League tier. The Bandits are confident in their current success rate and have made a new goal, which is to advance to the Champions League by this time next year.

It is my firm belief that The Bandit's have showed there unwavering commitment to earn the privilege of being a competitive squad; and they have done so by conquering Titian-like obstacles though their blood, sweat, and tears. 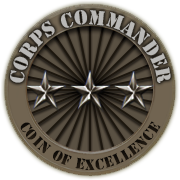 C0ACH came to me in or around November 2018 inquiring about promoting a squad to a CP squad. C0ACH informed me that the squad was working hard, participating in events on a regular basis, but at the time they were not meeting the 10% requirement at that time. C0ACH was encouraged to get the squad to a higher competitive level in which they could qualify for the competition squad status. C0ACH accepted the challenge and went to work, personally leading from the front and helping this squad with achieving their goals. It is my honor to award C0ACH my challenge coin for not only taking on my challenge in an honorable fashion but successfully surpassing the expectations that was set for this challenge. A job well done.
And

The Legion of Merit Award

C0ACH has been on the front lines with the Bandits since they have first started competing and his leadership has been instrumental in the Bandits success in the competitive gaming world. C0ACH has donated countless hours of his personal free time assisting his two squads. C0ACH took the time to establish multiple tactics for each map, built successful game plans, after evaluating how their opponents were winning their matches, after learning their opponents weaknesses. In the beginning there were some members that struggled with consecutive losses. C0ACH retained his resolve and encouraged the team to keep pressing forward, working on their personal gaming skills, and on their knowledge of the game mechanics. C0ACH helped his teammates build up their self confidence and led them to countless victories.

The Squad staff of the Fury and Hellcat squads have gone above and beyond their normal duties to assist in planning, preparation, and training their squad members with the single focus to achieve their competitive goals. These folks have consistently given their team words of encouragement during difficult defeats and have praised their squad members for their successes without taking credit of their own. Tactical Gaming is a better place for having these Squad Leaders and Squad Assistants as Leaders.  A job well done.

The members of The Bandits worked long and hard over the past two years trusting their leadership to help them achieve their goals in Competition.  These folks have invested countless hours in training and exercising their plans to prepare themselves to be successful in their matches. A job well done everyone. Keep up the hard work.

as such from the 26th day of September Two Thousand and Nineteen.

These appointees will therefore carefully and diligently discharge the duties of the grade to which appointed by doing and performing all manner of things thereunto pertaining. And I do strictly charge and require all personnel of lesser grade to render obedience to appropriate orders. And these appointees are to observe and follow such orders and directions as may be given from time to time by Superiors acting according to the rules and articles governing the discipline of Tactical Warfare.

Given under my hand at 1st Corps / World of Tanks Division, on this 26th day of September Two Thousand and Nineteen.