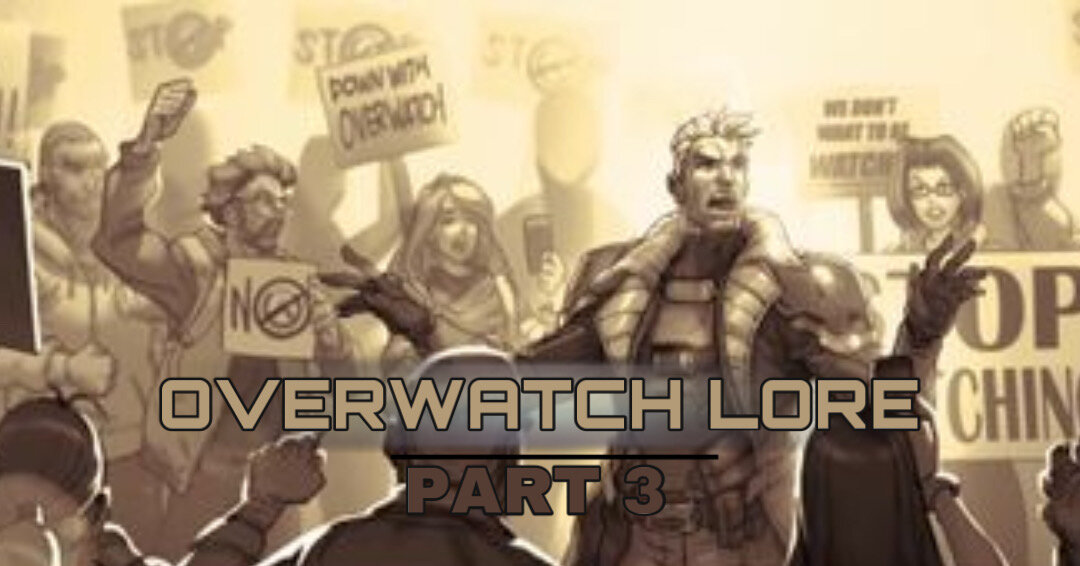 Welcome to the 3rd and final part of our Overwatch Lore series! If you’ve missed the first 2, you can find Part 1 here and Part 2 here!

The death toll for the Second Omnic Crisis hits over fifty thousand now! A Talon Team lead by Reaper goes after Watchpoint: Gibraltar. Reaper is stopped by Winston, but only after getting a list of former Overwatch members' addresses. Winston calls to reform Overwatch. Mei gets released from her ten year emergency cryofreeze, and decides to join the Overwatch Reform. Widowmaker kills Tekhartha Mondatta at Kings Row. Genji reveals to Hanzo that he's alive (no thanks to him). McCree eliminates a Talon Team that was attacking an American train, and dumps the thing they were after before they can come back in and snatch it. Reinhardt and Brigitte repair his Crusader's Armor and take out a small local gang; while Junkrat and Roadhog kill the CEO of Hyde Global and blow up their tower. The ‘Shrike’ Sniper starts disrupting Talon operations in Egypt. Soldier:76 attacks a criminalcompound in Giza, where he goes head to head with Reaper, and the Shrike stops them, and ultimately gets Reaper to leave. Shrike and Soldier reveal their identities (Ana and Jack) to each other and team up.

Sombra leaks LumeriCo information, and protests start happening against the company. Due to Sombra, Junkrat, and Roadhog robbing from the LumeriCo, the CEO steps down. Reaper embarks on a Talon mission to try to kill Katya Volskaya, with Sombra and Widowmaker. The team fails because of Sombra's unprofessionalism. Torbjorn finds Bastion in the woods, and he discovers that Bastion is sentient, so he takes him home. Widowmaker and Reaper attempt to steal the Doomfist gauntlet, where they are foiled by Winston and Tracer, along with a couple meddling kids. Doomfist is imprisoned, but then he breaks out and meets with Maximilien. The two of them plot together the death of a fellow Talon member Viallis. Doomfist attempts to steal his gauntlet back all by himself this time, and kills every OR15 unit sent to stop him. Efi buys OR15 parts and creates a custom AI for this robot, whom she names Orisa. Zarya goes on a mission to capture Sombra, and fails. McCree defeats the Deadlock Gang, rescues Echo, and answers Winston's call. Baptiste helps two Talon agents invade Sinclair, owner of Sinclair Pharmaceuticals mansion. He then double teams them, and helps Sinclair escape on the promise that be provides free medical aid to all the clinics in Haiti that needed them. And now were all caught up on Overwatch... until Overwatch 2 comes out that is!

If you haven’t played Overwatch yet, or you do but didn't know the story until now, how do you feel about it? I think Overwatch does their story pretty well for what is primarily just a FPS/fighting game! You don’t have to know it to enjoy the game, which makes it even more interesting to hear the first time!

Let me know what games you would like to see us explore next time!