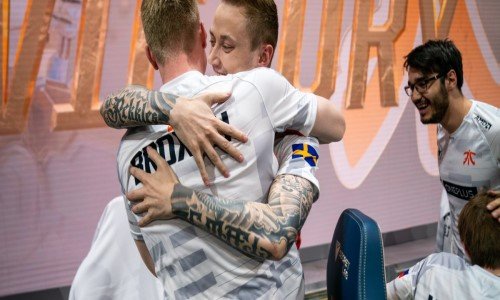 Last Sunday, the group stage of Worlds 2019 finally concluded. After two weeks of intense battling on the rift, we are down to 8 teams that will compete for the summoner's cup in the weeks to come.

All three of Europe's representatives got through to the quarterfinal stages that will take place in Madrid, Spain, in the coming week. Fnatic, G2 Esports, and Splyce are all going to defend Europe's pride and glory against China and Korea's powerhouses.

Today, we are going to set the spotlight on Fnatic, the European champions from season 1. They drew a hard group with three times worlds winner SK Telecom T1, Chinese powerhouse Royal Never Give Up, and North America's Clutch Gaming. After going 1-2 the first week, they bounced back with a rocky 3-0 in week two. With this, they finished 2nd in the group and advanced to face FunPlus Pheonix in the quarterfinals.

Fnatic got off to a shaky start, but to me, it seems like they got better and better as the group progressed. Beating giants like RNG and SKT is not an easy task, but it almost felt like they surpassed their opponents in skill at times. To most Fnatic fans, they saw a glimpse of last year's runner up in the same tournament.

Going up against FunPlus Pheonix is probably the most comfortable draw they could have gotten out of all the 1st seeds coming out of groups. Make no mistake though, Pheonix are not to be underestimated. With a 5-2 finish in addition to star players like "doinb" in the midlane and "Crisp" piloting support, Fnatic could be up for a challenge. On the other hand, there are some positive things to look at as well. Their European rivals Splyce, managed to go toe-for-toe with Pheonix and had to play an epic tiebreaker to decide the group winner. Given that Fnatic historically have had a good record against Splyce, you would imagine that it does not look so grim after all. Add Fnatic’s team fighting and strong solo laners into the mix, and I think we are in for a real treat.

What do you think? Which Fnatic is going to show up on Saturday? The shaky, insecure Fnatic, or last year's Worlds finalist? Give us your thoughts in the comment section below!

You can follow all the latest news and updates from here: https://watch.lolesports.com/home.

The quarterfinals will kick-off on Saturday 26th at 12pm CEST. We can not wait for the action to start!