Recently members of our beautiful League of Legends Division took part in a Clash tournament. What is Clash? Clash is a bracket based tournament created by Riot Games that has been incorporated into the League of Legends client/game. A team is made up of 5 players ranging from Tier I to Tier IV based on the average of the entire teams tiers combined.

So recently a team of; Beefhanger - Top Lane, TG Here Cause Posh - Jungle,  Mageck - Mid Lane, Ractet - ADC, Fairy Sorceress - Support, who got placed into the Tier 3 division. This was a team thrown together out of the blue with members from various positions and Beefhanger even being a player they found on the boards to join TG and play with them.

The thought process before the games, Fairy Sorceress had this to say

I was going to play Clash with Ractet, but since I heard that Mageck and TG Here Cause Posh also wanted to play in Clash I invited them and found Beefhanger on the forums. We sorted out our roles and got ready to play.

We played a few games beforehand to see how we would play with Beefhanger, all was good so we started to plan out our path to victory. We wanted Mageck on Vladimir, since it's one of his best picks

Unfortunately though their plan was already not going to plan, before the first game had even started. Magecks Vladimir was banned by the enemy team and he was forced into playing Orianna. But Perhaps this wasnt such a bad thing overall. The botlane of Ractet and Fairy in the bottom lane were able to use their comfort picks of Caitlyn and Nami, Beefhanger was on Fiora who if played right can counter the enemy champion Jax and TGHereCausePosh was able to go onto Zac, a champion that can combo very well with the Orianna and works well with the other champions also. TGHereCausePosh was able to influence the lanes very well and assisted all the lanes to a comfortable victory.

Here are the stats for the game and what Fairy had to say about the 1st game:

We were pretty relaxed for the first game, we knew what we wanted to ban and what we were hoping to pick. Mageck's Vladimir was banned so he went Orianna which worked really well with our team. We managed to win all lanes and in teamfights we shut down all their attempts at initiating. 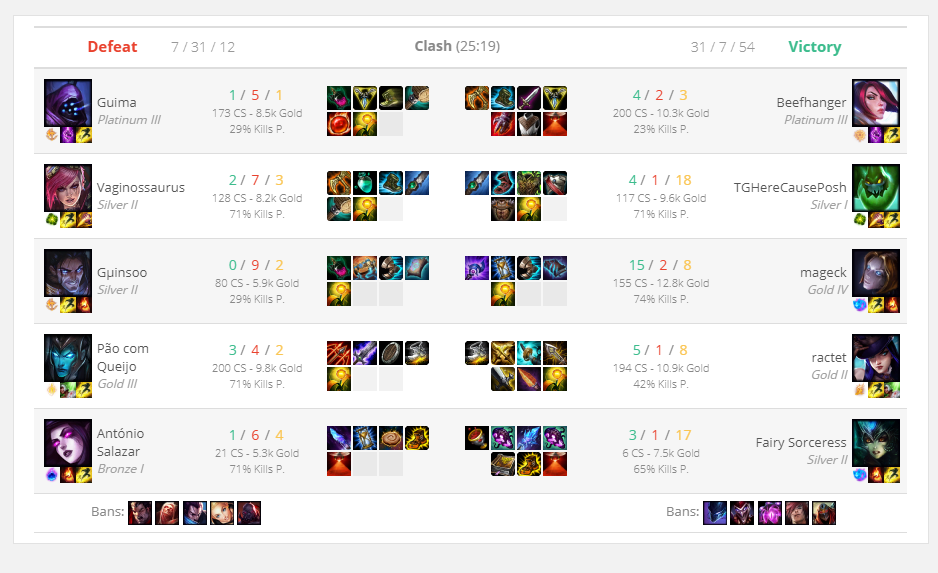 In the second round, as you would expect, the competition got a little bit tougher. The compositions got a little stranger with both teams ending up playing mid lane champions top lane. Magecks Vladimir was once again banned for the second game so he went back to the trustee Orianna however the enemy team did ban the Zac and Fiora from the game before so those two players switched over to Yasuo top to counteract the Cassiopeia pick and Sejuani jungle with a change in the adc role also with ractet moving to Kai'Sa and Fairy Sorceress staying on Nami for the knock up to help Yasuo/Orianna clean up. The opponents kept applying pressure and trying to force the TG Clash team into making mistakes. However they did not make any and were able to use team play to overcome their advances and once again sail smoothly to a fairly comfortable win as you can see in these statistics. 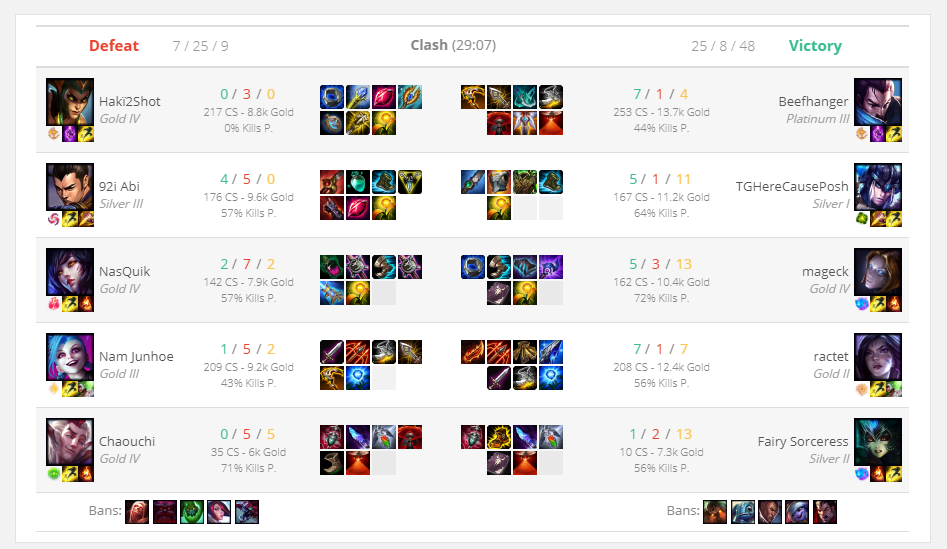 After winning that game our team had advanced onto the finals. Just one step away from victory. But how simple would it be? Here's what Fairy sorceress had to say:

We're in the finals! The enemy team were banning our comfort picks and what we had been playing earlier so we had to adapt and find something else to play. We didn't really have time to create a balanced team composition but the enemy team decided to ban my Nami and leave Vladimir open allowing us to get Mageck his Vlad and I just went Lulu.

The enemy team ended up banning the Sejuani which then forced TGHereCausePosh back onto the Zac, Beefhanger beefed up the team with a tank Sion and ractet moved onto the Varus. Mageck was able to completely stomp the Shyvanna in the midlane, Bot lane was able to push in the Tristana and Lux who weren't able to get farm and weren't able to deal with the poke coming out of the Varus/Lulu combo in the bot and when they managed to engaged our team was able to turn the fight and pick up a couple of kills. At around mid game after winning the majority of the lanes they were able to group up and push for objectives and the other team was too far behind to deal with the heavy assault. Thanks to great team coordination they were able to combo the Zac jumping in with a lulu ult and with the Varus being able to be buffed up by the Lulu and clean up the fight from range. Meanwhile Vladimir and Sion were able to get on to the back line which gave them a huge edge in team fights leading to the eventual victory for the final game of the tournament!!

Here are the stats from that game: 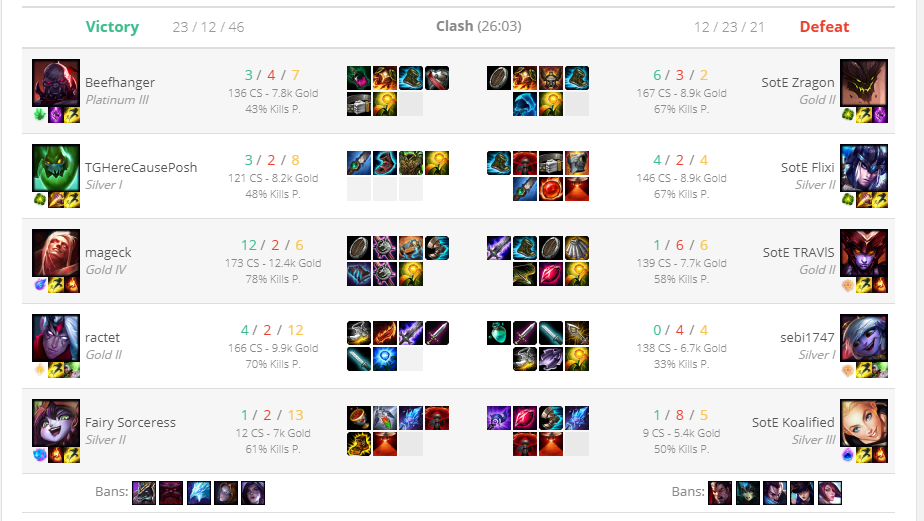 So, congratulations to the League of Legends Division for a huge victory and may we see many more from you!! If you would like to see more articles like this or have anything to say about this article make sure to leave something in the comment section below and most importantly make sure to congratulate the team!!