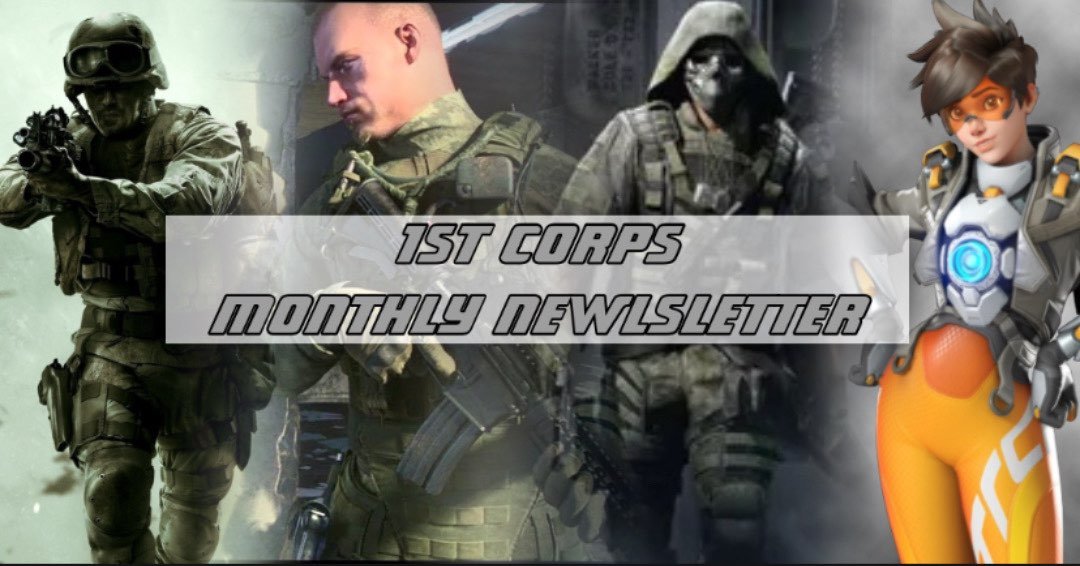 Welcome to the second edition of the 1st Corps Monthly Newsletter! This newsletter provides a way for you to know what is going on in your corps, milestones people have hit, upcoming events, and more! If there is anything that you'd like to see in the next edition, please let me know!

This month we are taking a look at our Overwatch Division. They recently changed from having three separate brigades to just one, Crossplay! This has caused a lot of changes in rosters, names, practices, events, and more. I asked a squad member, two squad leaders, a Commanding Officer, and the Division Officer a few questions to better understand how things were going in their eyes! Below is what they said:

How long have you been in the Overwatch Division?

Toontown0909 (1st Bat SM plays on PS4): I've been in Overwatch Division for about ten months. I originally joined back in June of 2020. This past March I transferred out, and I returned approximately one month ago.

Epic (2nd Bat SL plays on PC): I have been a part of the Division for a week and a half now!!

Repairedyang (1st Bat CO plays on XB1): Since I joined! Almost 7 months ago!

Primestrike (DO plays on PS4 and PC): I have been part of the Overwatch Division for my whole time in TG which as  been 1.5 years.

What do you think of the changes that have occurred in game with the addition of Crossplay?

Toontown0909: I think that the addition of Crossplay will be a great benefit to our community. While, like most things, Crossplay has it's pluses and minuses, it is my belief that this will allow us as a community to include more people and help us grow closer together than ever before. Personally, I'm really excited to get to play with new members from other platforms that I haven't had a big chance to interact with them before. This sounds to me like an excellent opportunity to make new friends, and I couldn't be any more excited.

Epic:  I think the changes are very good! It brings people together from all kinds of places, people who don't like to play on PC but have friends on PC/Xbox are now able to play together instead of having to buy multiple consoles or a computer just so they can play with their friends. I think its an amazing addition and I believe it is the future of gaming.

LadyMercyLtd: I really enjoy playing with people on Xbox, Switch and PC. I have already met so many new people - it is really exciting. Honestly I think it is more difficult to play against PC DPS - their aim is insane! But then I guess, I just need to get better at using cover and improve my positioning. So I think of it as I get an opportunity to improve my performance.

Repairedyang: I think it is an awesome improvement! Queue times are way better!

Primstrike: I think the changes that came in with the addition to Crossplay are a mix of good and questionable.  The good thing about Crossplay is obviously the ability for us all to play people who have the game on other formats.  The Crossplay system is quite easy to use and understand.  There are some minor teething issues with trying to get PC and console joining together, but I feel that they will be sorted out in future patch updates.  I am unsure about some of the gameplay choices that have been made (main one being strengthening the turrets on console in line with PC, they seam to do to much damage).  With regards to aim assist being disabled during PC/console games I feel maybe a weaker aim assist system may have worked better - mouse and keyboard allows for larger and quicker range of aiming movement that I don't think controllers can reach. I think people may be able to adapt to playing without the aim assist with controller, just not sure if they will get the same level as mouse and keyboard. This is something I would have liked to see Blizzard test.

How do you think the transitioning to a Crossplay Brigade instead of 3 individual brigades has gone?

Toontown0909: There has been some communication challenges, but overall the Overwatch Division Leadership has been working daily to help bring our community together.

Epic: I think the transition has gone very well and really smoothly. I know some members are quite wary of the idea of having to play against enemies that are using a keyboard/mouse instead of a controller but personally I have had a lot of fun playing with members from other platforms and its cool getting to know new people and playing together!

LadyMercyLtd: Our DO Primestrike (aka c_lakin) has been very active arranging crossplay ccp and crossplay practices, and has provided everyone with opportunities to meet players from the other platforms. I have made as much use of this as possible and allready met some great people. I also got the chance to play with Hivarius again; he left ps4 for PC last year and it was really nice to play Overwatch with him again.

Repairedyang: I think so far it has went really well! Its still pretty new but i believe in the staff and think we can overcome any issues!

Primestrike: I feel that the transitioning to a crossplay brigade instead of individual platforms has gone really smoothly, all the TG members have adpated well to the changes we have made.

What are you looking forward to in the future with either the game Overwatch or something the division is doing?

Toontown0909: I'm really looking forward to more events, as well as getting to play with new members. I've heard amazing things about the membership from the other brigades and I'm really excited to get to interact with all these wonderful people.

Epic: In terms of the game I'm looking forward to seeing how things will play out with the new Overwatch 2 rule set and the mechanical changes they're making to each role. On the Division side of things, the DO c_lakin/primestrike has been organizing a custom games night and recently did an SS+ fun night so we could all get to know each other. So, I am looking forward to more events like this were we can play across different platforms, play some fun games and not take it too seriously, and meet new people who may not even be in the division!

LadyMercyLtd: We have just started practicing for the upcoming TG Overwatch League Tournament and it is so much fun playing in our new League Teams. I hope we all have a great time; our XO zSilvally has made a tremendous effort to make balanced teams so we should all have a chance of getting some great games and have some fun. Hopefully it will be a recurring event every year.  I am looking forward to new maps and heroes coming with the release of Overwatch 2. And hope that if the game goes free to play that some parts, like Competitive mode will still be kept exclusive to the paying customers, so we don’t get to many trolls.

Repairedyang: I  look forward to seeing OW2! And seeing us grow as a division and hold more events!

Primestrike: I am looking forward to being able to hold events for all division members, instead of limited to a single platform (getting to know more of the division members that I could not previously interact with).  I am also looking forward being able to grow the division further (recruiting should be slightly easier as we can all now recruit cross platform instead of relying on squad members trying to recruit for their own platform only).

In addition to OW going Crossplay, many of these members not only have lives outside of TG, but also hold positions in other departments! Let's take a look at what all the have going on!

Do you hold any positions outside of the OW Division? If so, what position is that, and can you shed some light on what the entails?

Toontown0909: In addition to being a squad member in Overwatch Division, I am also a Section Leader for Minecraft over in the TA Vanguard Legion. This really exciting for me as Minecraft is a game I've been passionate about for many years, and I'm excited to be able to share something I love with other people. As Section Staff, some of my specific tasks are to fill out the Practice Reports, and plan other activities and events for my members. Additionally, I also hold the position of Social Media Team Lead over in our Public Relations Office. In short, as the team lead, I am responsible for Tactical Gaming's entire social media presence. I help guide the Social Media Team, and respond to requests when TG members need assistance from the PRO.

Epic: I currently hold the Digital Media Team Lead position which entails of graphics design and video production. I personally prioritise graphics and we have 1 or 2 members who work on video editing with the rest also focused on graphics. We make things ranging from PB/PPR headers, Article images and items you may see on our website and across our social media. We are always on the lookout for new members so if you have any interest in that sort of thing feel free to shoot me a PM!

LadyMercyLtd: I don’t hold any other positions within TG. IRL- I work full time as a QA manager and I also hold the position as wife and mother of two.

Repairedyang: I currently am also a member on News Team! It is a really fun position if you have the time, and I recommend it to anyone who enjoys writing!

Primestrike: No other positions held outside of OW division.

Overall things seem to be going pretty well with Crossplay, a few hiccups, but nothing I don't think we can overcome! I want to thank all of my volunteers for giving us an insight into Overwatch's transition.

Next month, we will be exploring Escape from Tarkov. They just went through a complete wipe a few days ago! Hopefully things are progressing well there!

Congratulations to the following on their milestones:

Keep up the amazing work!!!

Among Us Night hosted by @primestrikeon the main TG Discord

*More events will be added to the TG Calendar. Please check it out for more events and to RSVP to the above events*

**All dates and time to subject to change.**

***These events are open to all members in TG as long as they do not interfere with your practice schedule.***

Happy Birthday to the following members from 1st corps: